All that ice cream

Once we got out of the bus in Zadar there were a lot of taxi drivers who all wanted to offer us a ride. But since we more or less knew the direction, we decided to leave the bus station quickly and to start walking towards the old town and the sea. In any case, we only had small backpacks and a walk would be nice after the bus ride. And indeed, after a short walk we got to a park next to the old city walls. A park filled with typical Mediterranean plants like pomegranates and cacti. Then we entered the historic part of town and had our first encounter with the small streets of Zadar. The cobble stone streets lined with beautiful old buildings, filled with people enjoying a cool drink and a nice meal in the shade, definitely seemed inviting.

A mixture of architectures

Such a turquoise sea 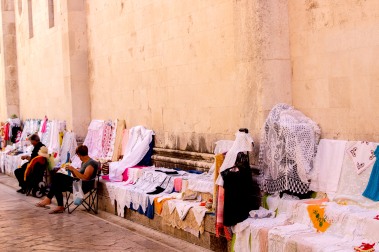 Selling embroidered products next to the cathedral

After checking into our room and enjoying a slice of pizza on the boulevard as a late lunch it was time to discover the city. Perhaps the most original monuments in Zadar are the Sea Organ and the Monument to the Sun. The Sea Organ is definitely my favourite. Walking along the beautiful turquoise sea towards the final tip of the peninsula on which the old town is located you start hearing its sounds. You are approaching marble steps leading into the water, under which a system of tubes is being played by the wind and the waves to create a melody. It is clearly a completely random melody, but it works surprisingly well. Next to this is the Monument to the Sun, a large solar-powered circle that lights up at night in different colours. Both monuments represent communication with nature, through light and sound respectively. And both monuments were built after Zadar was for a large part destroyed by bombs during the second World War. Fortunately, quite some old buildings have survived. Walking through the streets of the old town it is easy to spot the different influences: from ancient Roman, to Byzantine and Venician. The mixture is really very special. Besides experiencing the history through the architecture, we were lucky enough to run into a festival of traditional culture. So before dinner we got to see some traditional music and dance. Always a nice surprise!

Monument to the Sun 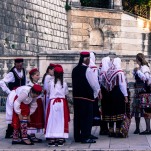 Festival with traditional dance and music 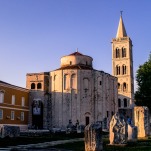 Church of St. Donatus
And the dinner did not disappoint. There are plenty of restaurants in the old town, and many of them have seafood. Living in Berlin it is a bit harder to get good seafood all the time, so I was completely happy. But this was not the only type of food we saw everywhere: clearly the most popular snack for everyone was ice cream. So many ice cream stands next to each other, and so many people walking around with an ice cream in their hand. It seriously made us wonder about the amount of ice cream that is being eaten in total during a summer in Zadar…

Unfortunately, the ice cream I had was the only thing that disappointed me in Zadar: no real lemon flavour in the lemon ice cream. And this is where making your own ice cream comes in handy: you can determine the flavour. Therefore a recipe for a frozen yogurt, which is even easier to make than a “real” ice cream. No ice cream machine needed in this case.

For this frozen yogurt I normally use a plain, full-fat (biological) yogurt that I strain through a tea-towel. You can also use Greek yogurt, that is creamier by nature. Basically, the less liquid there is in the yogurt, the creamier the frozen yogurt and the more evenly it freezes. The exact amount of honey added also influences the consistency of the final product. And of course, if you are not a fan of cardamom, you can easily leave it out.

Start by straining the yogurt: just place a sieve or colander over a bowl and cover with a clean tea-towel. Put the yogurt in here and leave in the fridge for at least an hour or two, so that the liquid can get out.

Once the yogurt has been strained, wash the oranges and grate the skin on a fine grater. Mix the orange zest through the strained yogurt. Press the juice out of the oranges and pour in a small pot. Add one of the teaspoons of honey. Break the cardamom pods open and add them as well. Reduce the orange juice over a medium to hot fire until you have less than half of the amount of liquid left and the juice has turned into a sticky syrup.
Let the syrup cool down and pour through a sieve into the yogurt. Add the remainder of the honey too and mix well. If you want, you can add some of the seeds from the cardamom pods. They have quite a strong taste, but I personally like the pops of flavour when you bite on the seeds. Scoop the yogurt mixture into a freezer bag. Leave this in the freezer for at least 4 hours to set. If you leave it longer and it freezes more than it should, just take it out of the freezer for around 15 to 20 minutes and squeeze the yogurt in the bag to mix and to break up any ice crystals that might have formed.

After this time, serve the frozen yogurt. You can scoop it out, or just cut off one of the tips of the freezer bag and squeeze it out like soft serve ice cream.

Serve the frozen yogurt like that, or add topics like shaved chocolate or chopped up nuts. Enjoy!

One of the perks of living in Austria: easy access to the mountains!
Geysers del Tatio, one (of many) of my favourite places in Chile. It's the largest geyser field in the Southern Hemisphere. The magnificence of nature almost makes you forget the cold... Almost.. (It was -14C in the morning at 4300m above sea level.)
Valle de la Luna, my first stop in the Atacama Desert. A combination of sand, stone and salt in one of the driest places on earth. Also, a prototype of the Mars rover was tested here, pretty cool if you ask me.
Two weeks ago I woke up at the same early time to go winetasting. Maybe I should change my plans for today...!
Throwback to being back in the Netherlands last week. It was fun being tourist in my home country!
Golden hour in the vineyards around Vienna.
Loading Comments...
%d bloggers like this: