It is summer again! Here in Barcelona it is the season of street parties, beach, and general happiness. Even though I still have to work the normal rhythm, when I come out of work and can go for some drinks in the sun it feels like holidays.

But the real holidays for me are the ones I grew up with. We used to pack the tent, hop in the car, and drive off. This could be to any country, we didn´t make any bookings but just went to places we were interested in and found a campsite. After a few nights we moved on to the next place. It´s a real feeling of freedom. For the cooking this meant we had a simple gas burner and some pots and pans. Nothing fancy, but those are still the basic tools for any great meal. So making delicious food was never an issue. We didn´t have any electricity, so of course also no fridge. That is in a way an advantage as well, as it forces you to buy fresh ingredients. And that makes for a good opportunity to go and visit local markets, which is one of my favourite things to do when I am in a different country. On the markets you can find out what produce are typical from the country and what the locals buy. There are different smells, colours, and types of food in each place. From beautiful vegetables and cherries on a small market in Aix-en-Provence, France, to fish stands where they showcase the massive swords of the delicious swordfish they sell in Catania, Italy. And of course everything in between. 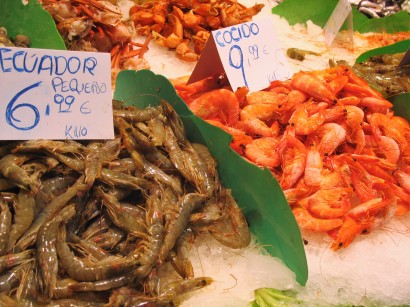 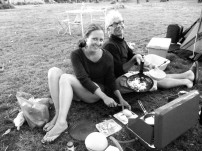 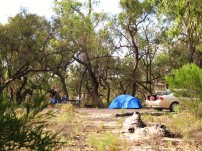 Camping
One of my favourite things on the markets in the south of Europe used to be, and still is, the fish: so much more choice than on the market in the village in the Netherlands where we used to live. It looks impressive and sometimes almost surreal, all those different sea creatures. I personally really love the prawns. The whole ones that you have to peel yourself. On the campsite, but also at home, it is a great combination to eat those prawns simply fried with garlic and chilli, paired with a lemon pasta. Lemon spaghetti is a pasta dish with a cold sauce based on lemon juice and zest, cream and parmesan cheese. The lemon pasta is great for cooking on a campsite, both because of its simplicity and its summery feel. In the end, there are not many flavours that scream “summer” more than lemon does.

For this recipe I have taken this concept of the prawns and lemon spaghetti as a basis, but slightly changed the flavours and textures. Of course, I will also continue cooking the simpler version of the pasta especially on the campsite or on busy days, since it is amazing as well. 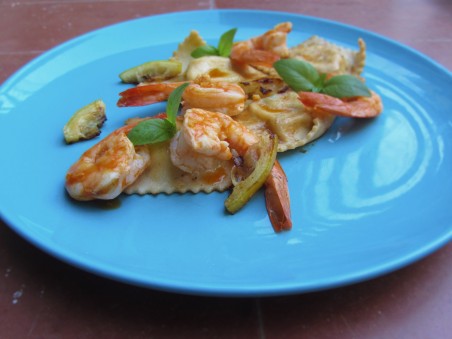 The first step is to make the pasta dough, so that this can rest for a while. Make a little mountain of the flour on a clean working surface and create a well in the middle. Add a pinch of salt, a dash of olive oil, and two eggs. Mix this with your hands and kneed until you have an elastic dough that does not stick to your hands anymore. In case it is too wet, add a bit of extra flour. If it seems to dry, just add some olive oil. After a few times of practicing making pasta will become really easy and quick. Wrap the dough in some glad wrap and leave it in the fridge to rest.

Now it is time to do the step that is probably most time consuming: peeling the prawns. Take the heads and the shell around their body off and put the heads aside. Leave the tip of the tail on. Also remove the veins, by making a small incision in the back of the prawns and pulling them out. When all the prawns are peeled and deveined, heat the 40 ml of olive oil in a small pot on a medium fire. Add the prawn heads to the oil, and fry them until they are pink. Turn down the fire to low and leave for around 5 minutes. Then you can turn the fire off and leave the oil to infuse with the prawn flavours.

The next thing to do is making the ravioli filling. Mince one of the garlic cloves, a small one, until it is really fine. Grate the zest of two of the lemons, and juice both of them as well. Finely chop half of your basil. Mix the chopped basil, the garlic, and the lemon zest with the ricotta. Add lemon juice to your liking, around the amount of juice of one lemon. Season to taste with salt and pepper. Place this mixture in the fridge until needed. Keep the rest of the lemon juice for the sauce.

After you have finished the filling, finely chop the other two cloves of garlic which you will need for the prawns. Take the remaining lemon and chop the top and bottom off. Slice lengthwise in four. Then cut out the membrane in the middle, at the same time removing the seeds. Chop all quarters in thin triangles, of around 5 mm thick.

Now a very important step, because it is time to make the ravioli. While you are doing this, place a large pot of salted water on the fire to bring it to a boil. Beat the third egg and place on your working surface. Take the pasta dough out of the fridge and divide in three or four pieces. Roll the pasta out until you have very thin sheets, either using a pasta machine or by hand. The sheets need to be thin enough that when you lay them on a surface and blow along the sides, the pasta comes up and moves in waves. Cut squares out of the pasta that are a little bit bigger than the size you want your raviolis to be. Place a teaspoon of the lemon and ricotta filling on half of the squares. Brush the sides of each of the squares with filling with the beaten egg and place another square of pasta on top. Carefully close the ravioli with the sides of your thumbs, working away from the filling to press out all the air. Cut the sides with a ravioli cutter. If you do not have one, just cut the excess pasta off and use a fork to make a nice pattern on the sides.

By now, your water should have come to a boil. Place the triangles of lemon you cut before in the water, and blanch them for 3 minutes. Then take them out and dry them well with kitchen paper. You can turn the fire under the water down to a low heat. Meanwhile, strain the olive oil which you have been infusing with the prawn heads and set aside. Heat up a frying pan on medium heat and add a knob of butter. Add the dried lemon triangles and a pinch of salt and sugar each. Fry them on a low heat on both sides until they are brown, for around five minutes. Take them out of a the pan and wipe the pan with some kitchen paper.

Now it is time for some multitasking. Place another frying pan with some olive oil over medium heat and add the chopped garlic. When the garlic starts to fry, add the prawns. Once the prawns turn pink on one side, turn them around and add a pinch of salt and hot sauce to taste. The amount of hot sauce depends on how spicy you like it. Fry the prawns until pink on both sides, around 4 minutes. In the frying pan in which you fried the lemon, add another knob of butter and the prawn oil. Heat this until the butter has melted and starts to colour. Then add a good splash of water from the pot in which you boiled the lemon triangles. Let this boil, while stirring, for around 3 minutes until the oil and water emulsify into a sauce. Add salt and lemon juice to taste. Lower the fire under the sauce so that it cools down a bit. Meanwhile, bring the water in the pot up to a boil again and add the ravioli. Boil them for 4 minutes or until al dente. When the ravioli are cooked, add them to the pan with sauce and coat them in the sauce.

Finally, it is dinner time! Serve the ravioli with the spicy prawns (spoon the hot sauce and garlic from the pan over the prawns), the fried lemon wedges, and some extra basil.