Canada is not just a large country, it is massive. Of course, I am aware that it is the second largest country in the world. Still, every time the distances are a surprise again. Going down from Québec to The Maritimes took a good part of a day. But even though hanging around in buses and on bus stations can be tiring, the results were more than worth the effort. The Maritimes, consisting of New Brunswick, Nova Scotia, and Prince Edward Island, are truly beautiful.

My first stop in this region was Saint John in New Brunswick. The town is small and the buildings are relatively old. The entire city seems sort of run-down. Not the gloomy and sad kind of run-down, but the way that makes the architecture more interesting, as if the place wants to tell you about its history. As an extra plus, it has the oldest continuing farmers´ market in Canada. Following a beautiful day in Saint John I traveled further south, down to Nova Scotia where I first visited the region around Halifax. The area is amazing, especially the rocky coast with scenic lighthouses scattered all along. The houses in the area are made out of wood and painted in bright colours that contrast with the blue water. And there are plenty of small harbours with fishing tools like lobster and crab nets laying around, ready for the fishing season to start. More to the east, on Cape Breton Island, the coast is not just rocky but there are actual mountains. The scenic road around the island, the Cabot Trail, has quite steep parts with stunning views over the ocean. Even on a foggy day when half of the mountains are hidden in the clouds, the views are amazing. The last province of the Maritimes, Prince Edward Island, is equally interesting. The island is known for the red earth, the colour of which especially pops out due to the blue sea and the white snow. Spectacular views all around! 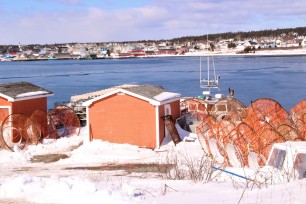 But even when I thoroughly enjoyed the nature, the most amazing part were the people along the way. This already started in Saint John, where a Canadian and a French chef cooked an amazing dinner with fresh New Brunswick seafood for all people in the hostel (four including them and myself). In Halifax I went on a roadtrip with a girl I had met earlier in Québec City. And I bumped into the same French chef again. Since there are not so many people traveling in this area in winter, you do often meet the same travelers again in different places, and it is great to catch up and share experiences. Finally, the hostel I staid in on Cape Breton was actually more of a home-stay. I was the only guest, and the host took me around for a day to show me the highlights of her island. She was even surprised when I took her out for lunch as a thank you. In the end, those kind of meetings are the things that make traveling truly enriching.
Only on Prince Edward Island I staid in an Air BnB accomodation instead of a hostel, since the hostel there was still closed. The host was friendly, but he was busy working so I saw him only twice. Now this was clearly a bachelor house, and when I wanted to cook it turned out that there was just one frying pan as equipment. So this shows that one-pan meals, like the one here, can be very useful at times. And when you can make it for more people and actually share with people you met, even better! Because in my case, there were many more interesting and exciting meetings than the ones described here.

Meatballs with egg, artichokes and tomato 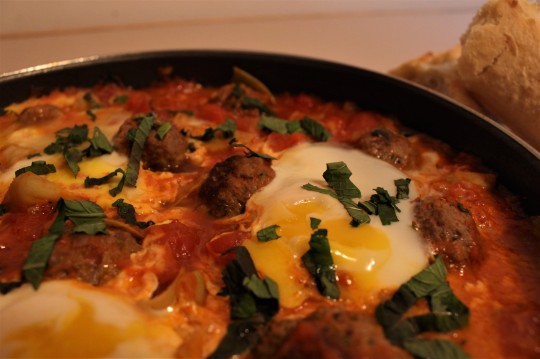 Ingredients (for 2, but multiply if you want)

Start off by chopping the onion very finely. Place the minced meat in a bowl, and add a little less than half of the chopped onion to the meat. Also add a good pinch of salt, black pepper, and the thyme. Mix this together well. If you do not feel sure about the seasoning, you can fry a little bit of the meat mixture as a test. When you are satisfied with the flavours, shape the meat into small meatballs, about the size of a ping-pong ball.
Heat a dash of olive oil in your frying pan over a medium fire, the only pan you´ll need to use for this recipe. Add the meatballs and fry them until they have a nice brown colour all around. Take them out of the pan and set aside.

To prepare the tomato sauce, mince the garlic and chop the chilli first. If you don´t want the sauce too spicy, take the seeds out of the chilli. When you use fresh tomatoes, chop them finely. Wipe the pan you used to fry the meatballs, and add a small amount of olive oil. Fry the onion that you kept aside with a pinch of sugar. When the onion starts to soften, add the garlic and the chilli. Once the garlic becomes fragrant, add the tomatoes and the bay leaves to the pan and season with a good pinch of salt. In case you use canned artichokes, simply slice the artichokes in quarters and add them to the sauce. When you use the fresh ones, peel the outer leaves off until you are left with just the soft core. Cut off the hard tips of the leaves, and peel the stem. Half them and take the furry core out. Then slice them up and add them to the sauce straight away. Leave the sauce to simmer over a low fire for at least 15 minutes, but preferably longer, until it starts thickening up and becomes tasty. When you use fresh artichokes, check that they are tender, this will take a bit longer. Check the seasoning of the sauce and add a splash of lemon juice to taste.

Now it is time to take the meatballs you set aside and add them to the sauce. Leave this to simmer for another 10 minutes so that the flavours can combine and the meatballs can cook through. Take the bay leaves out of the pan. As a final step, crack the eggs in different places in the sauce between the meatballs. Sprinkle a bit of salt on top of each egg and cover the pan. Let this cook until the egg whites are solid but the yolks are still runny. It usually takes around 4 minutes. But since it also depends on the heat and the size of your eggs, just make sure you check so that you don´t overcook the eggs. Tear the fresh basil up and sprinkle over the top of the dish.

Serve the dish with some fresh bread to dip in the sauce. Enjoy!