Waking up on the backseat of my rental car, I felt pretty cold. Even thermo clothes and my sleeping bag couldn´t hide this. But when I sat up straight the view from the windows was quite spectacular. The night before I had parked on top of a large hill with a view all over Dawson City and the surrounding mountains, in the Yukon Territory in the north of Canada. Now, in the morning, the valley was filled with clouds, like soft peaks of meringue. The tops of the mountains peaked out of this white layer, and were coloured in different shades of orange and pink due to the sunrise. 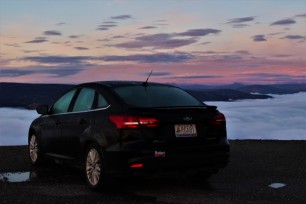 Camping in the car

Not a bad place to wake up

Regardless of the cold I was excited for the day to come, since my plan was to drive to the Tombstone Territorial Park. Until a few days earlier I had never heard of this place. But some people I met in the hostel in Whitehorse, Yukon´s capital, had been super enthusiastic about this park. So I had to visit it during my road trip. Unfortunately this did mean I had to leave my pretty spot on top of the hill, and go down into the clouds. They didn´t seem so soft and meringue-like anymore while being surrounded by them; just cold, wet, and miserable. But, hoping it would turn out to be only morning fog, I drove towards the start of the Dempster Highway, east of Dawson. This highway is a gravel-surfaced road that goes 737.5 km up north, crossing the arctic circle. The Tombstone park starts at a bit over 50 km up on this highway. I was a little bit nervous, since the road is infamous for getting flat tires and unfortunately I have no clue on how to change a car tire. But I carefully started driving up, avoiding potholes and a beaver that was sitting in the middle of the road. Soon enough the clouds luckily started to give way to the sunshine, and I could see the mountains of Tombstone Territorial Park. There aren´t many official trails in the park, it is mainly a place to go on back-country hikes. I decided to start by hiking the first short trail I passed along the highway. After this I did another trail and a bit of the back-country as well. And it was truly one of the most amazing experiences I´ve had. There aren´t that many trees on the sides of those mountains, the vegetation consists mainly of lower bushes and mosses. Since it was the middle of autumn, these shrubs had turned into incredible shades of red and yellow. Above those colours there was the white of the snow on the high peaks. Both in the sunshine of the late morning and with the threatening clouds of the afternoon, the landscape was one of the most spectacular I have ever seen. Especially since it was such a surprise, as I didn´t know beforehand what to expect from this place. The feeling of really being in the wilderness, due to the lack of people and official trails, only added to how special this experience was.

Colours of the Yukon

Colours of the Yukon 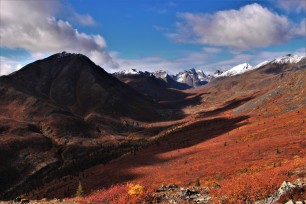 And maybe I am crazy, or maybe the evenings of eating cold soup in the car had their impact, but those golden and red mountains with white, snowy peaks reminded me somehow of one of the dishes I like to make: this red beetroot risotto topped with white goat cheese. Unfortunately, that evening, parked in the wilderness of the Tombstone Territorial Park, there was no risotto on the menu. Just chicken soup with wild rice. And the night was even colder than the previous one, but filled with the memory of all this beauty I couldn´t care less. Oh, and fortunately I didn´t end up with a flat tire, only with an extra chip off my windshield, that anyway already had cracks when I got the car. 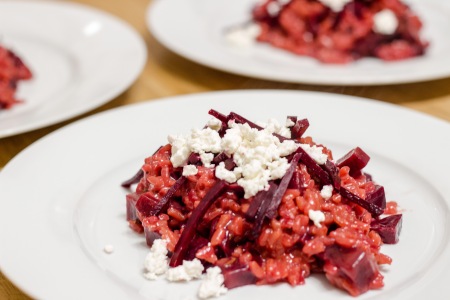 Ingredients (for 4 as a main course)

First of all, preheat the oven to 200°C. Take any leaves of the beetroots and wrap four out of the five raw beetroots in aluminium foil. Place them in the oven and let them roast in there for around 50 minutes. After this time, check with a knife if they are soft all the way through. This is my preferred way of cooking beetroots, since it really brings out their sweet and earthy flavour. Once the beetroots are cooked, peel them and cut them into small cubes.

Peel the fifth beetroot, the one you did not put in the oven. Slice this one in very thin sticks. Place them in a bowl and add the balsamic vinegar and a good pinch of salt. This raw beetroot will add a bit of crunch to the dish.

After this preparation, chop the onion and the rosemary finely. Grate the Parmesan cheese and put it aside. Pour the stock in a small pot and keep it over a low fire, so that it stays warm. Heat a knob of butter in a large pot over a low to medium fire. Add the chopped onion, the rosemary, a pinch of salt, and some black pepper. Cook the onion until it is translucent and soft. Only then add the rice to the pot and give it a good stir, so that it is covered in the butter. Once the rice looks slightly translucent, after a minute or so, add the red wine. When the wine has evaporated, start adding the stock bit by bit, a ladle at the time, while stirring regularly. Keep it over a low fire, so that the rice bubbles but doesn´t boil. It should take around 20 minutes before the risotto is cooked properly. When you are around 10 minutes into the cooking time of the risotto, add the cubes of cooked beetroot. After the 20 minutes, the rice should be soft but still hold its shape. There should still be enough liquid to keep the risotto moist and oozy. Once its cooked properly, add the rest of the butter and the Parmesan cheese to the pot and stir through. Check if you need to add any seasoning, this will depend on the stock you use. Turn the fire off, cover the risotto and let it rest for around 5 minutes.

And then, it is time to serve. Divide the risotto over four plates. Sprinkle the rice with the strips of raw beetroot, and crumble the goat cheese over the top. Enjoy!

One thought on “Beetroot risotto with goat cheese”

One of the perks of living in Austria: easy access to the mountains!
Geysers del Tatio, one (of many) of my favourite places in Chile. It's the largest geyser field in the Southern Hemisphere. The magnificence of nature almost makes you forget the cold... Almost.. (It was -14C in the morning at 4300m above sea level.)
Valle de la Luna, my first stop in the Atacama Desert. A combination of sand, stone and salt in one of the driest places on earth. Also, a prototype of the Mars rover was tested here, pretty cool if you ask me.
Two weeks ago I woke up at the same early time to go winetasting. Maybe I should change my plans for today...!
Throwback to being back in the Netherlands last week. It was fun being tourist in my home country!
Golden hour in the vineyards around Vienna.
Loading Comments...
%d bloggers like this: