The sun quickly disappears behind the hills. At the same time, the sky starts to turn beautiful shades of pink and orange. The mountains, that seem so far away, look like they are cut out of black paper and pasted against the sky. It’s a wonderful time of the day, but it doesn’t last long. Within half an hour it will be dark. And in this case, being in the countryside in the south of Spain, dark really means dark. There are some streetlights in the tiny village where my parents live, but in the surrounding area it is pitch black and quiet.

And not only the nights are quiet. When you go out for a walk or go running in this area you rarely meet anyone else besides the wild rabbits. Sometimes you can see a shepherd leading his goats through the hills. It is a dry area, but everywhere there are small olive and almond orchards. Sometimes you wonder how the people know which patch of land belongs to whom, since an orchard might just mean a few trees between two hills. And between those cultivated areas there are other plants flourishing, like figs and pomegranate trees. I have never eaten as many pomegranates as last autumn in that area. The small tree in my parents´ backyard already gave plenty of fruits. But wherever you go in the surroundings you can pick more from the trees that just grow in the wild. I never even really realized how there are different types, with different flavours and colours: the seeds range from a deep red to almost white. We had picked already almost more pomegranates than we could eat, when we met a neighbour of my parents on the local market. This is an older Spanish man, as vital and lively as can be. He has a large piece of land, holds goats, and often drives around on his tractor, always immaculately dressed like a typical Spanish man his age. This time, on the market, he asked whether we liked pomegranates. When we said we did he promised he would bring us some of his. And that he did indeed. Unfortunately some had been left hanging on the tree already for too long, but there were still plenty to enjoy! 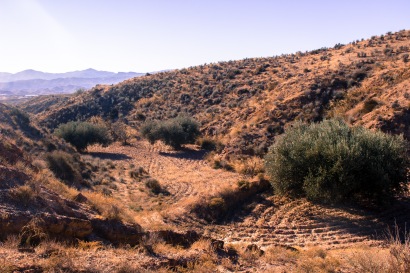 So of course we also had to eat all those fruits. My mother made juice out of some and we cooked many delicious dishes from my dad’s Persian cooking book. And finally, we ate a lot of the dessert on which this recipe is based.

To make the yogurt panna cotta I’m using yogurt that has been left to drain for a few hours. It’s the method used to make a traditional Dutch dessert, called “hangop”. It makes the yogurt creamier and less sour. Of course, you could skip this step and use normal yogurt as well. Or you can skip the step of making panna cotta and just use the “hangop”, but add less milk.

I am using cups as a measurement in this case, since I feel like those ingredients are easier to measure in a cup than in grams or milliliters.

Place the yogurt in the middle of a clean towel. Tie the four ends together and hang around the kitchen tap, or somewhere else with a bowl under it, so that the liquid can leak out of the yogurt. Leave it for some two to three hours.

Once the yogurt has had enough time, pour around four to five tablespoons of cold water in a small bowl. Sprinkle the gelatin on top and leave to soak up the water for around 10 minutes. Meanwhile, warm the milk in a little pot. Add the honey and stir well. Break the cardamom pots open and take the little seeds out. Crack them with the flat side of a knife. Mix those seeds and the saffron in with the milk as well. Take the milk off the heat once it almost comes to a boil. Add the gelatin to the milk and whisk well until it has completely dissolved. Leave the milk to cool down completely.

When the milk has cooled down, stir in the yogurt. Whisk it through so that there are no lumps left anymore. Pour the mixture into two ramekins and cover them with plastic foil. Then, you can just leave them in the fridge to set for at least four hours or overnight.

Finally, when dessert time has come, slice the pomegranate in half and take out the seeds. I usually slice the fruit through the middle, take one of the halves with the cut-side down in my hand, and use a spoon to bash on it until the seeds fall out. But you can do it any way you like.

Take the panna cottas out of the fridge. Turn the ramekins upside down on a plate and let the panna cotta slide out. You can dip them in some hot water and/or run a thin knife along the edge of the ramekin before to make it easier to remove the puddings. Serve with the pomegranate seeds.