Who would have thought I would ever feel sort of nervous about crossing a border within the European Union? I certainly did not. But getting into the bus from Berlin to Wroclaw a week after borders opened again, I did have a slightly weird feeling in my stomach. It was my first trip abroad during the Corona times, so even just crossing into Poland felt like an adventure.

Luckily, all went as planned and I arrived in Wroclaw late on Friday evening. It was time to find the hostel and just sleep. The next day started like a perfect holiday day, with a cappuccino outside in the sun, as a break during the five minutes walk between the hostel and the main square. Arriving at the square it did not seem like a normal holiday day though: very empty. It might have been a bit too empty, but therefore a good time to take photos. And that is something you can do very well on this square. It is a typical Polish square, surrounded by brightly coloured houses and with a city hall in the middle. But there is one thing that is not particularly typical: gnomes. The whole center of Wroclaw is full of small statues of gnomes of all sorts. Some are drinking, or playing an instrument, there is one riding a pigeon and one with a printing press… you name it and they are there. I had heard about them, but didn’t realize how many there would be. It is quite a funny sport to try finding as many as possible. Finding all of them you will probably never manage! After a full day of exploring the city center, viewing – besides the gnomes – the impressive 360 degrees panorama painting of some battle between the Polish and Russians, strolling through the botanical gardens and visiting the cathedrals, I came back hungrily to the market square. There were more people now, so it seemed much more normal, apart from the sign with “disinfected” that was placed on all restaurant tables. While watching the people pass by and the vendors trying to sell roses and balloons to the public, I had a great dinner of duck-leg, beetroot and potato dumplings. Later in the evening I got lucky and was treated to an amazing show of lightning and thunder, like natural fireworks. 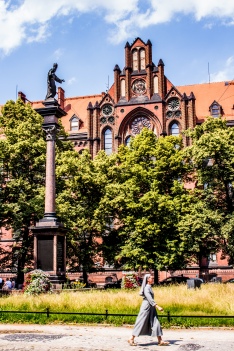 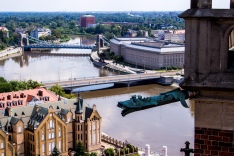 View from the cathedral 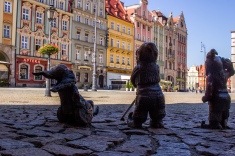 Gnomes on the market square
Just before having to catch the bus back the next day I came back to the market square for lunch. Because of course, I could not leave Poland without having eaten Pierogi! The traditional dumplings that can be filled with many different things, either savoury or sweet. On recommendation of the waiter I had a whole mix of different types; from vegetarian with potatoes to others with smoked meats. A great lunch before leaving this beautiful city.
And it made me realize it was finally time to prepare some dumplings again myself.

Heat up your oven to 220°C degrees. Wash the beetroots and wrap them in a piece of aluminium foil. Place in the oven and roast them for about an hour. After this time, try with a knife to see if they are tender all the way through. Take out of the oven and let them cool down.

Meanwhile, finely chop the onion. Melt a knob of butter in a small pan and add the onion and a bay leaf. Let the onion caramelize over a low fire until they are soft and browned, around 20 minutes. Season with salt and pepper.

While the onion is caramelizing, start on the dough. Measure around 25 ml of lukewarm water. Place the flour on a clean working surface and add a pinch of salt. Make a well in the middle and break the egg in there. Start mixing the egg into the flour. Once the egg has been mixed through, add the water bit by bit and keep mixing until the dough comes together. Wrap it into some foil and place in the fridge to rest.

Once the beetroots have been roasted and cooled down, finalize the filling. Peel the skin off the beetroots and chop them in very small pieces. Zest the skin of the lemon and add to the beetroot. Mix the onions and the cottage cheese through as well, but discard the bay leaf. Taste and season with salt and pepper.

Now it is time to assemble the dumplings. Roll out the dough to about 2 mm thickness using a pasta machine, rolling pin or an empty bottle if you have nothing else. I usually divide this amount of dough in 3 pieces to roll out. Use a cutter or an empty glass to cut the dough into circles of around 8 cm in diameter. Place a good teaspoon of filling in the middle of each circle of dough, fold over to a crescent shape and pinch the edges together to close.

Once all the dumplings have been created, bring a large pot of salted water to a boil. Toast the seeds in a hot dry frying pan for a couple of minutes.
Juice the lemon. When the water is almost boiling, melt the butter in a frying pan over a low to medium fire. Leave the butter on the fire until it starts browning, around 4 minutes. Add the lemon juice and a pinch of salt and pepper. Increase the heat and let the lemon and butter mixture boil down for around 3 minutes, until thickened up. Meanwhile, your water should be boiling. Place the dumplings in the water, if needed in batches, and boil for 4 minutes. Carefully take them out of the water and add to the pan with the butter and lemon mixture. Toss well and divide over two plates. Sprinkle the seeds over the top. Enjoy!

Today it is World Ocean Day, so a good moment to celebrate the beauty and importance of our oceans. And what's a better memory for this occasion than a trip along Australia's Great Ocean Road?!
Enjoying the wonders of nature is one of my favourite things. You might understand why I was very happy here when swiping to the next photos for my view.
Puffins! They actually aren't the national birds of Iceland, but they certainly have turned into one of the symbols of the country. They are represented as toys, on T-Shirts, mugs and all other touristy merchandise.
I don't know many things that are hard to describe in words and also in pictures... Seeing the erupting volcano was such a moment. So much power, the heat, the sound, the colours. Volcanos can clearly be destructive as well, yet so beautiful.
Tulip time.
No, those are not ruins of a city wall but an actual rock formation; the Teufelsmauer. Apparently, God and the devil made a pact that the devil could keep the Harz mountains if he built a wall before the first rooster crowed. The devil lost and he destroyed part of the wall he just built... Fortunately a part is left.
Loading Comments...
Comment
×
%d bloggers like this: